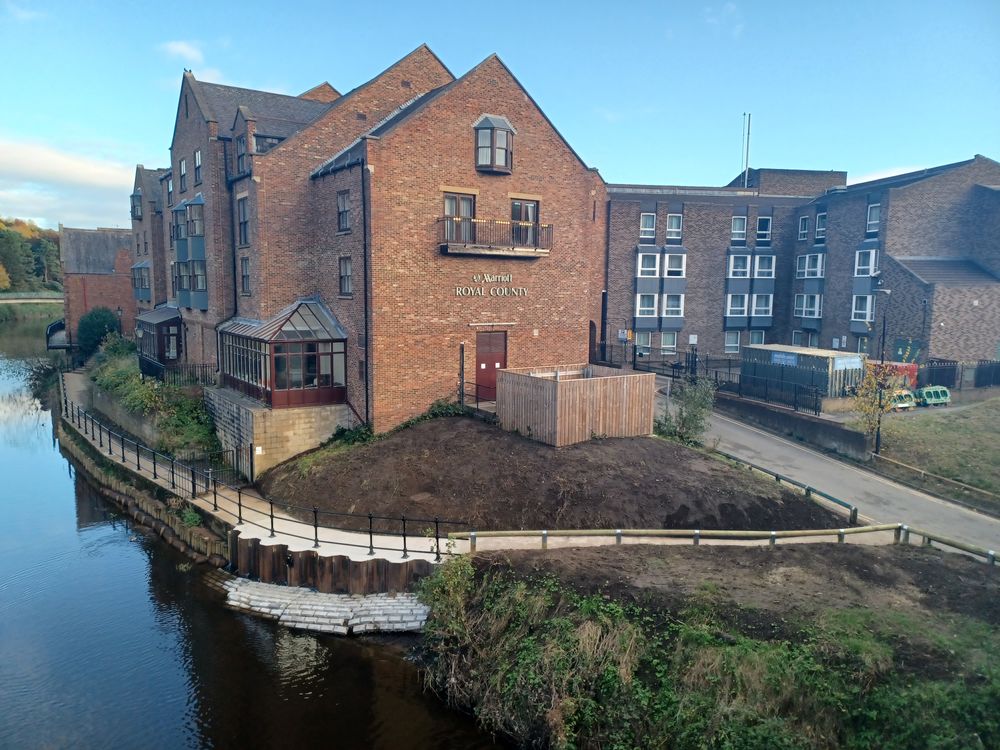 A project to install erosion protection measures, and to upgrade the existing infrastructure across a 70m area of the River Wear adjacent to the Marriott Hotel in Durham City Centre. Given the limited site footprint, this involved progressing works from specialist marine plant. The project was delivered whilst maintaining full access to the hotel, whilst managing a significant interface when co-ordinating both deliveries and plant movements.

Initial works included an environmental survey of the works area to identify any existing wildlife. A visual inspection was then completed to confirm the work scope with our client. In order to access the identified area of riverbank, a floating pontoon system was utilised, which was erected at a local rowing club, and floated downstream. Prior to the infill of voids located throughout the river edge, the existing silt overburden was first relocated. This was done using a combination of divers and an excavator positioned on the pontoon. In order to infill existing voids, grout bags were used, which were interlinked and secured in position using galvanised pins. Timber chestnut posts each weighing 50kg and 3m in length were then slung from the pontoon into position directly in front of the infilled voids, before being driven to the required depth using an excavator complete with post driving attachment. An adjacent row of 2m timber posts were then installed prior to the placement of Coir Rolls, which were tied and wrapped in accordance with the manufacturer’s instructions.

In order to retain the riverbank between the area of the Marriott Hotel and Elvet Bridge, a 9m section of sheet piles were installed. This involved excavating the area to the correct profile, before the piles were slung into position and driven to the required depth using a Movax attachment. In order to accommodate a localised drainage system, flap vales have been installed at predetermined locations within the piles. Once the piles were installed, the area at the rear was backfilled and compacted. To prevent future under scour of the sheet piled wall, concrete mattresses were placed directly in front, these were secured to the sheet piles to prevent movement during flooding of the river. Further works included the construction of a new RC footpath, and the replacement of existing cast iron handrailing.

Given the significant public interface, a bespoke traffic management plan was produced to control all plant and vehicle movements. Access to the site was only possible via narrow roads, bordered on all sides by local residents and businesses. The nature of our works required an Environment Agency Permit, for which method statements were provided for approval in advance of site works. Full adherence was required with an Ecological Conditions Report produced by our client, which identified measures to avoid disturbance to a number of habitats and species.