In 2012, a programme of extensive restoration began on Roker Pier & Lighthouse, a Grade II listed structure which had fallen into disrepair after decades of not being used. Funding from the Heritage Lottery Fund allowed Sunderland City Council to work on the structure, aiming to sympathetically restore it to its former glory when it was opened in 1903.

In 2014 Southbay were awarded the Roker Pier Major Maintenance works, the schedule of works included below-water repairs to the foundations of the pier, repointing areas of the pier walls and renewing the concrete pier deck.

In 2018 restoration was complete and the lighthouse interior, pier surface and railings, tunnel floor and drains and accessibility throughout the entire structure have been improved to a very high standard, truly reflecting the spectacular heritage of the building. A new entrance structure at the mouth of the Pier Tunnel marks the final stage of the Pier & Lighthouse rejuvenation. The innovative design of the entrance allows safe descent into the pier tunnel, meaning guided public tours can take place for the first time in the iconic landmarks history. 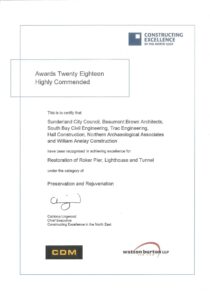 In June 2018 the scheme received a Highly Commended award at the Constructing Excellence in the North East Awards in the category of Preservation and Rejuvenation.