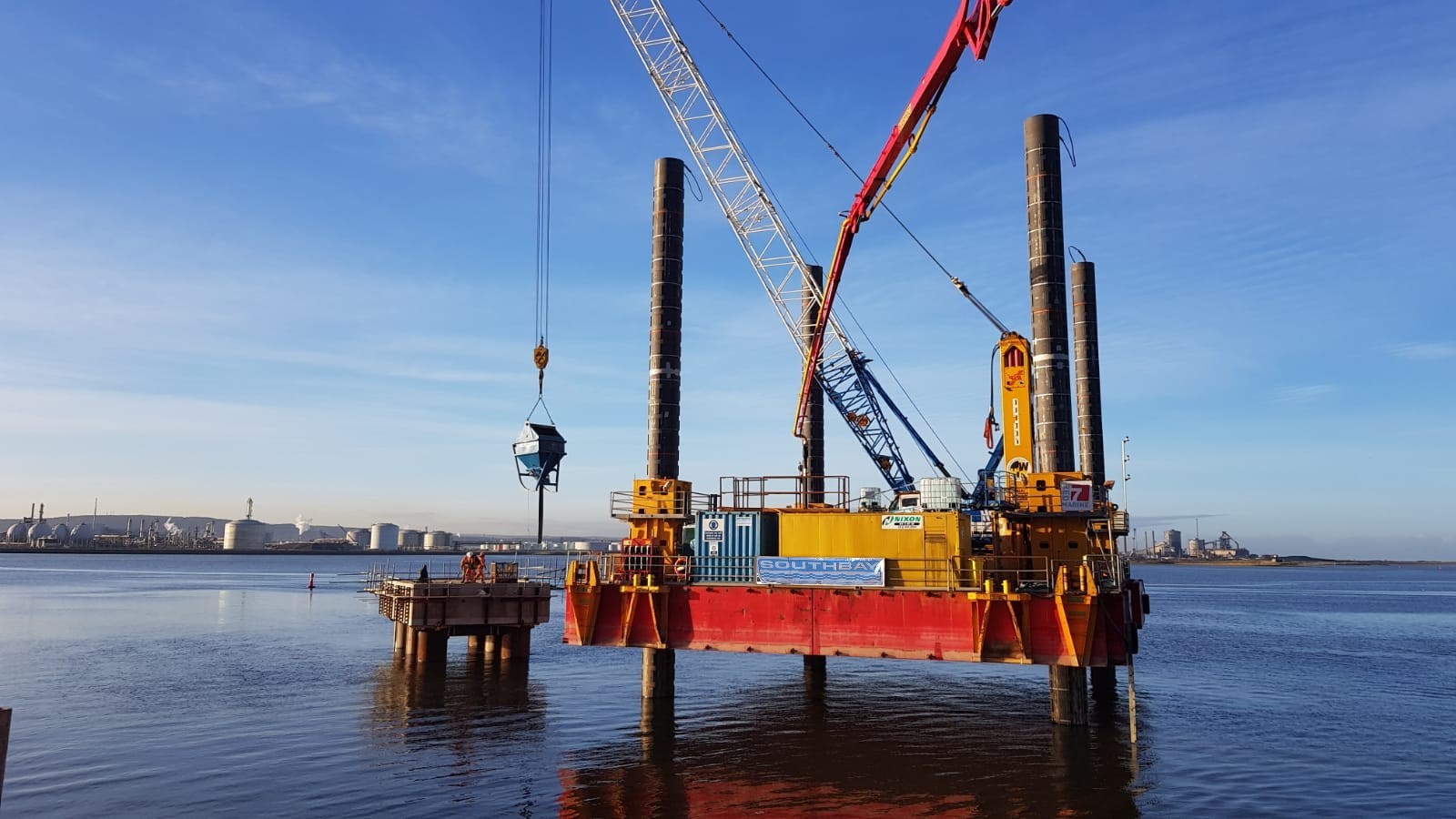 Able Seaton Port is located at the head of Seaton Channel, a tributary of the River Tees. Owned by Able UK, the facility is used to service the Marine Decommissioning market, and has the capability to handle a range of offshore construction vessels. Quay 1 is used as an import/ export facility due to the sizeable land holding available on the western side of the port. Due to increased operations, a decision was taken by our client to extend this existing 65m long heavy-duty quay by constructing 2no. Reinforced Concrete Mooring Dolphins. Each Dolphin consists of 6no. 1420mm diameter tubular steel piles.

Due to the proposed location of the structures, a Jack Up Barge, complete with a 180-tonne crawler crane was used when constructing both dolphins. The 1420mm tubular piles were transported from the site compound using a flat barge and lifted directly into a piling frame mounted to the side of the Jack up Barge. Vibro and impact hammers was then used to drive the piles to refusal. Once installed, each pile was then cut to the predetermined design height.

Following installation of the piles, the locations were then surveyed to confirm dimensions in preparation for the installation of steelwork. Supporting steelwork was then welded to the piles, accessed using a man riding basket and workboat. Pre-cast units were then lifted from the flat barge and landed into position. Each precast unit included edge protection in the form of handrailing in order to provide a safe working platform. Joints between the precast units were inspected, with sealant installed to prevent grout loss during concrete pours. Temporary fixings were then used to secure the precast units in place. Reinforcement cages, constructed within the site compound were then transported to the Jack up Barge and lifted into position in readiness for the required concrete pours. Provisions for the required quay furniture, were incorporated within the reinforcement.

Following completion of the concrete pours, berthing facilities in the form of fenders, ladders, bollards and handrails were installed. This also included installing a new access walkway directly from the main quay.

Due to the operational site environment, the project was delivered in accordance with a challenging programme, which involved progressing works across both day and night shifts, 7 days a week. Due to planned vessel movements at Quay 1, the project was delivered in two distinct phases, with the site team demobilising over the Christmas period. The project involved managing a number of notable risks which included co-ordinating the movements of specialist marine plant within a live operational site environment.