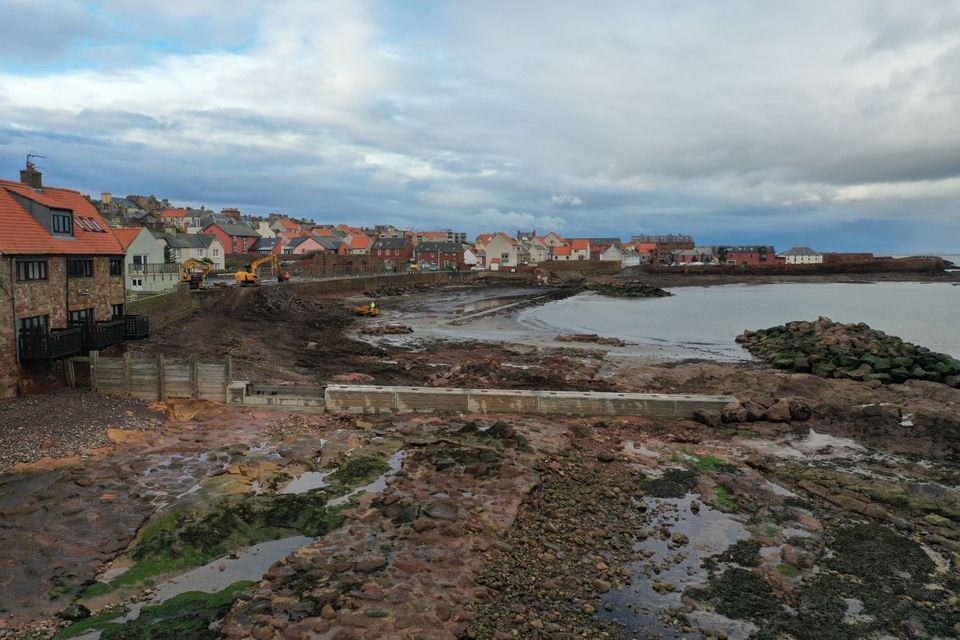 Dunbar is a popular seaside resort approximately 30 miles east of Edinburgh. Dunbar East Beach, which is located on the immediate outskirts of the town centre, is heavily used by the public, and is bordered by a number of residential properties. Following successive storms, the beach was significantly eroded resulting in a decision by the council to upgrade and introduce new sea defence measures in the hope of retaining sediment and encouraging natural regeneration. Following a competitive tender process, Southbay were awarded a contract to construct a series of sea defence measures.

Initial works included the collection and stockpiling of rock armour from a local quarry for use at various stages of the project. When constructing the standalone breakwater, works were programmed to coincide with the spring tidal cycle. The breakwater was formed in layers consisting of varying levels and sizes of rock (3 to 6 tonne). The profile of the structure was checked continuously to ensure compliance with the design specification. When transporting the rock across the beach, bog mats were used to protect 2no. sewage pipes.

Constructed along the line of an existing timber structure, the location of the new concrete groyne was then surveyed, with existing rock broken out to create a 200mm deep trench. All required dowels were then marked out within the excavation, prior to being drilled and resin fixed in position. A total of 5no. dowel bars were selected for pull testing of 120kN. Constructed in a series of bays, the required formwork was then installed complete with steel reinforcement. The subsequent concrete pours were programmed to coincide with the falling tide to maximise curing time. The new groyne includes a textured finish which will attract marine algae, encouraging biodiversity. In constructing the required finish, a test panel was first constructed for prior approval by our client.

Further works included the placement of rock armour across a 50m length of the existing seawall. A new rock groyne has also been constructed at the north west end of the beach. In both cases the new rock armour, varying from 3 to 6 tonne, was placed within an excavated trench, with existing rock placed directly above.

The project involved a significant public interface which resulted in a number of measures including the organisation of a public consultation, and issuing a letter drop prior to undertaking works. Given the narrow streets and parking requirements, a bespoke traffic management plan was developed to minimise disruption through site deliveries and plant movements. Sections of the beach were closed off to the public at various stages of construction, with a marshal employed to maintain segregation.